Skip to content
Conversation
What are the requirements of a playground?
How do ball games behave on a circular field?
How can a sport be used to research a space?
Can sports help us to design a festival?

Day 1: How can soccer compose music? 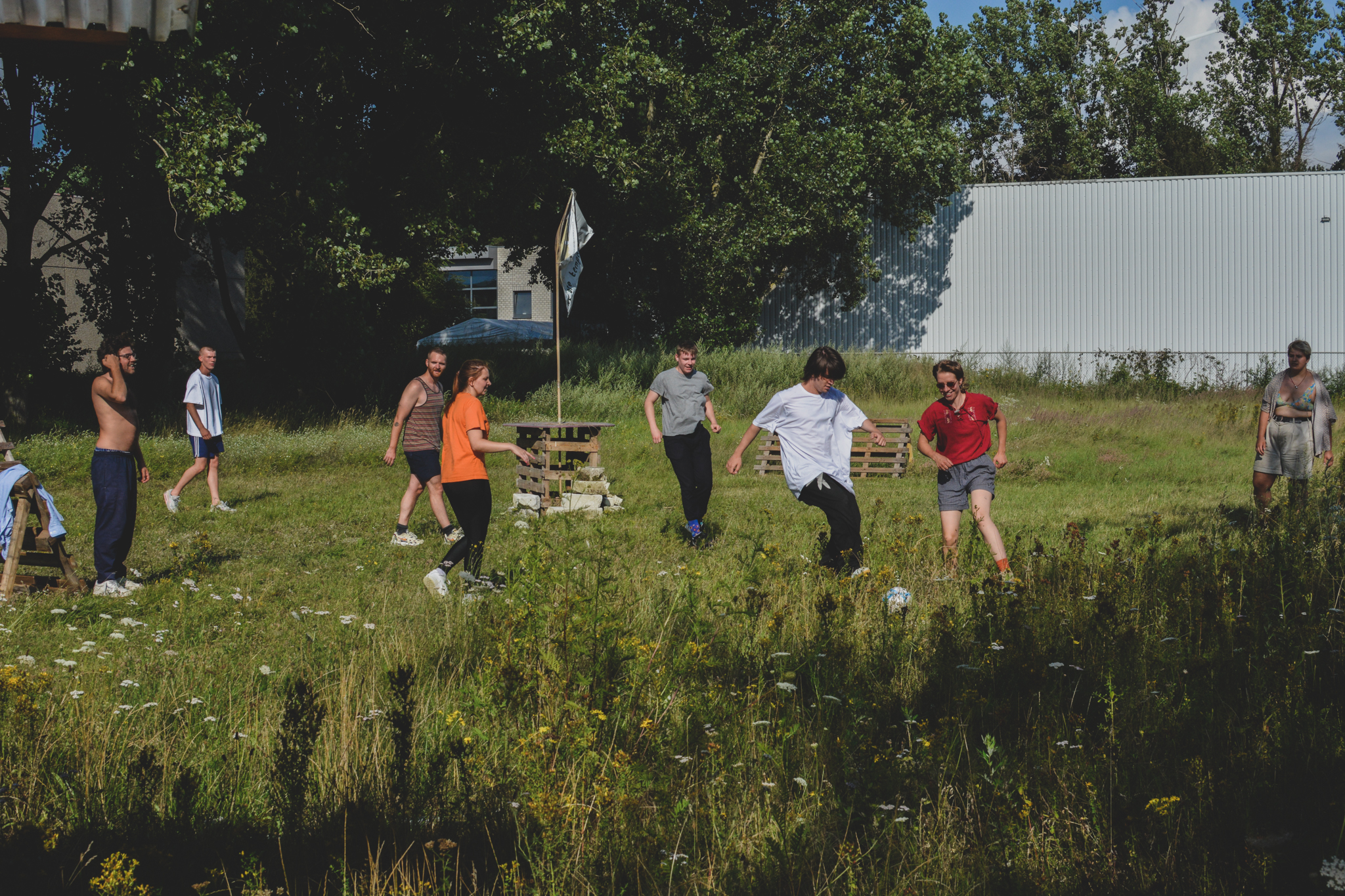 In the morning Elke Cuppens, Fiamma Osimo and Tjörven Santermans prepared the field for a game of soccer. Four goals, four teams, eight people in one circle. This experimental match was the perfect way to get familiar with this new space within the Maison Florida project. 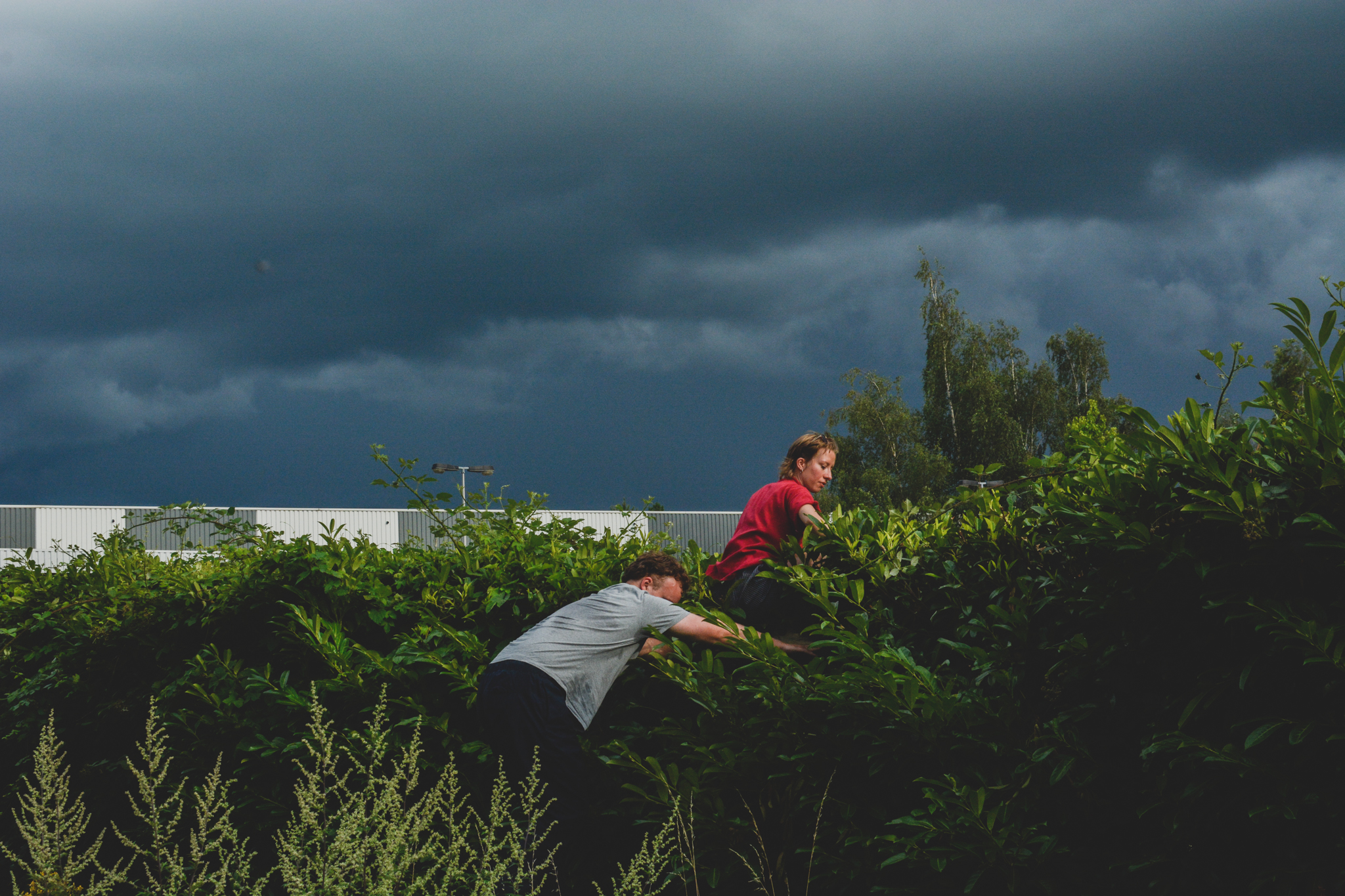 During our delicious evening dinner, prepared by Ilse Jooken & Fiamma Osimo we discussed the space and our new insights which led to the idea of creating a Musical Soccer Festival. Each of the four goals was linked with one musician who was granted a solo every time one of the players would score in that goal. This resulted in a participatory performance in which the players were both audience and musical conductors. 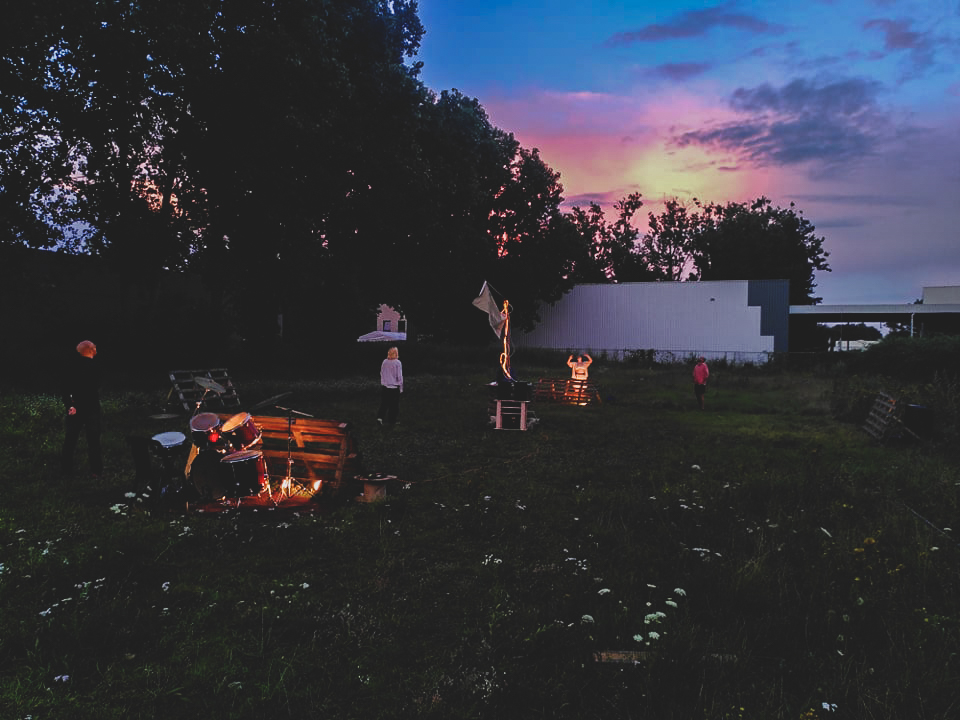 Day 2 – How can basketball celebrate both victory and defeat? 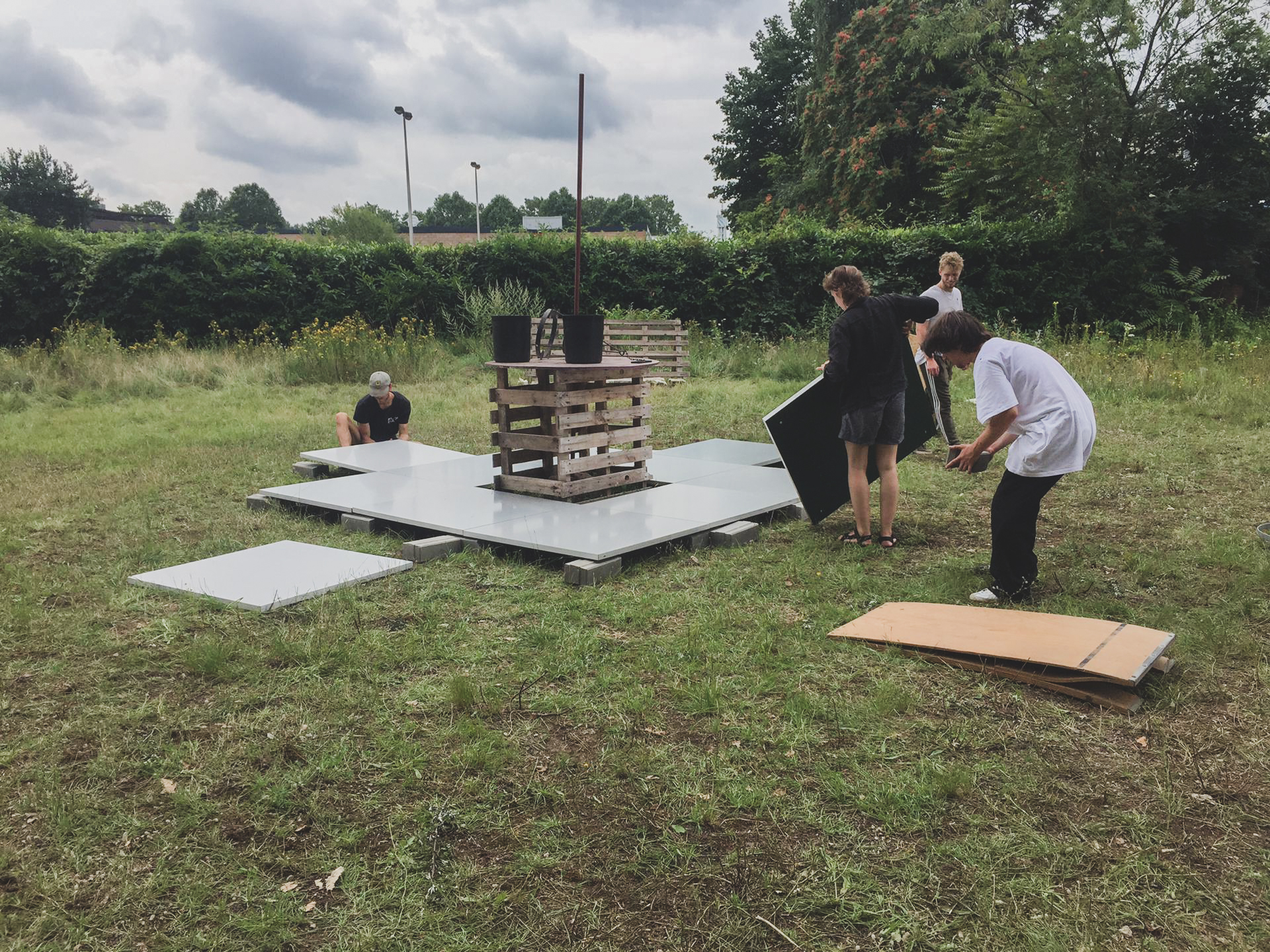 Tjörven Santermans, Rico Panvini, Elke Cuppens and Stef Lemmens started the day with the construction of a basketball field inside the circle that was mowed yesterday. We also designed a new hoop specifically for this circle shaped field that was welded together afterwards. 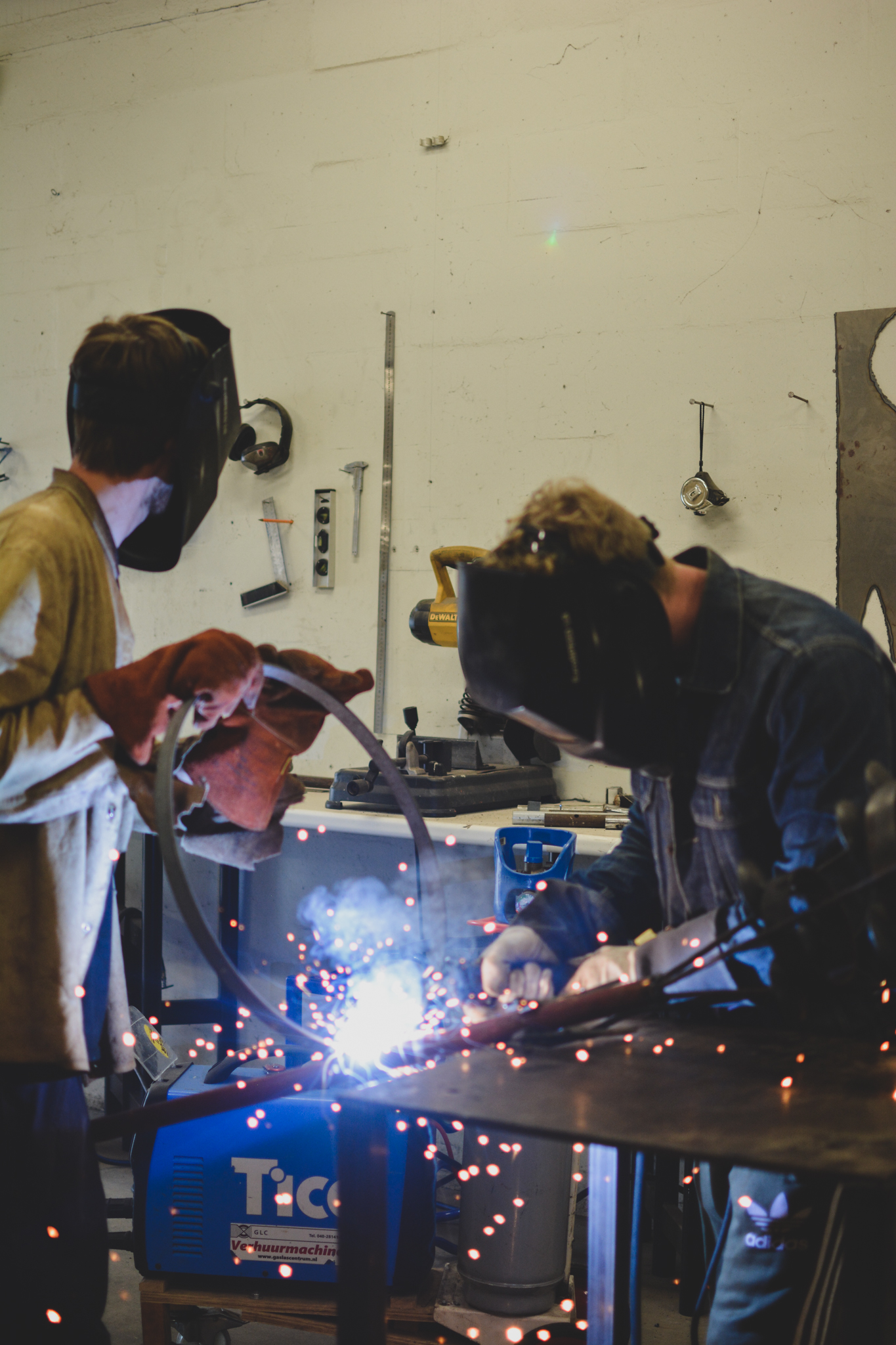 While we ate some burritos made with love by Fiamma Osimo, we discussed our wild ideas to turn this game into something more festive. We came up with the Karaoke Basketball Battle, in which two teams compete on opposing sides of the field. If one team scores, a player from the other team has to start singing along to one of the songs chosen by referee and musical conductor Simon Gorremans. A team has won when all players from the other team have left the field to sing their song, resulting in a win-win situation in which both victory and defeat is celebrated. 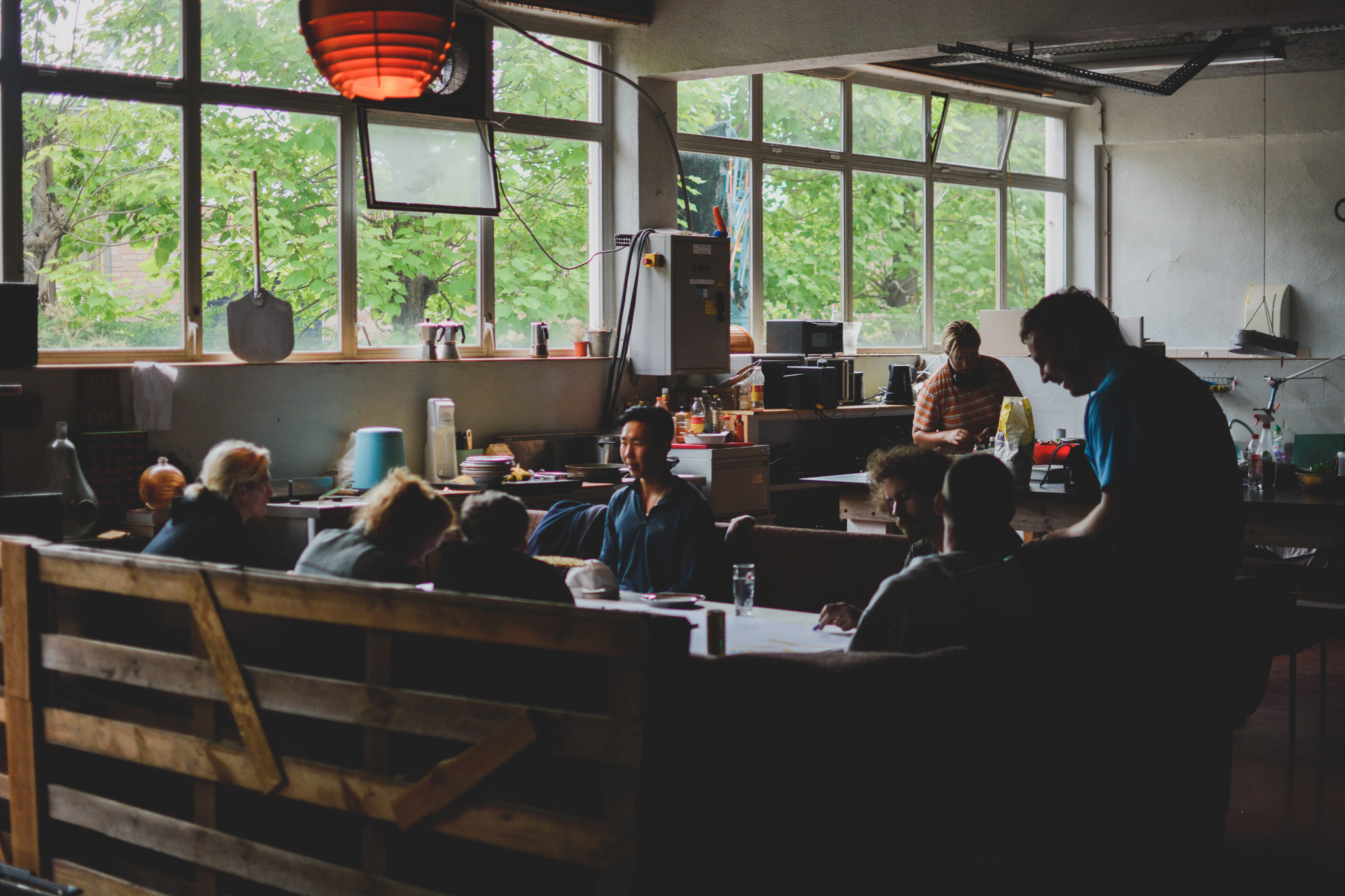 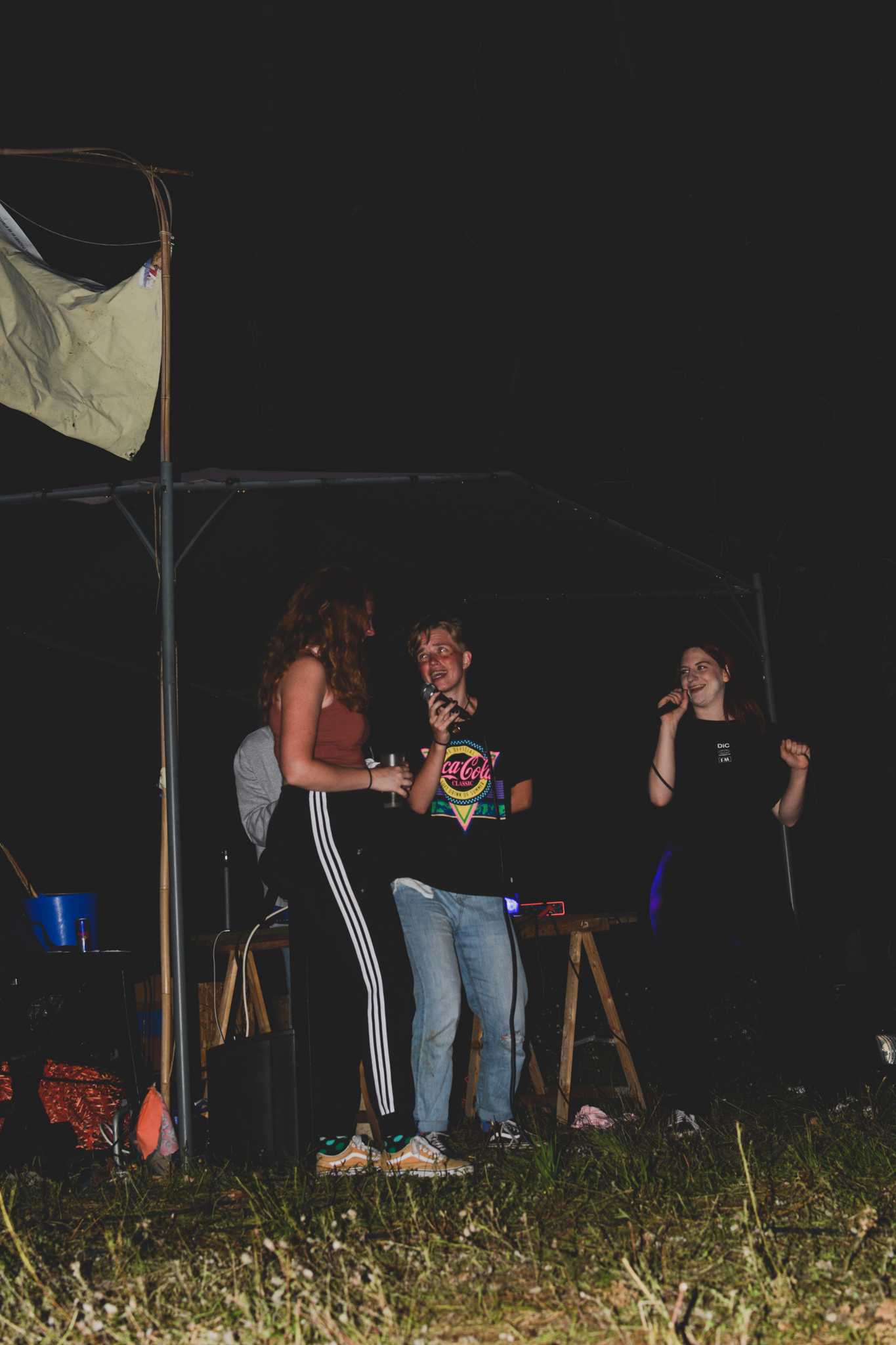 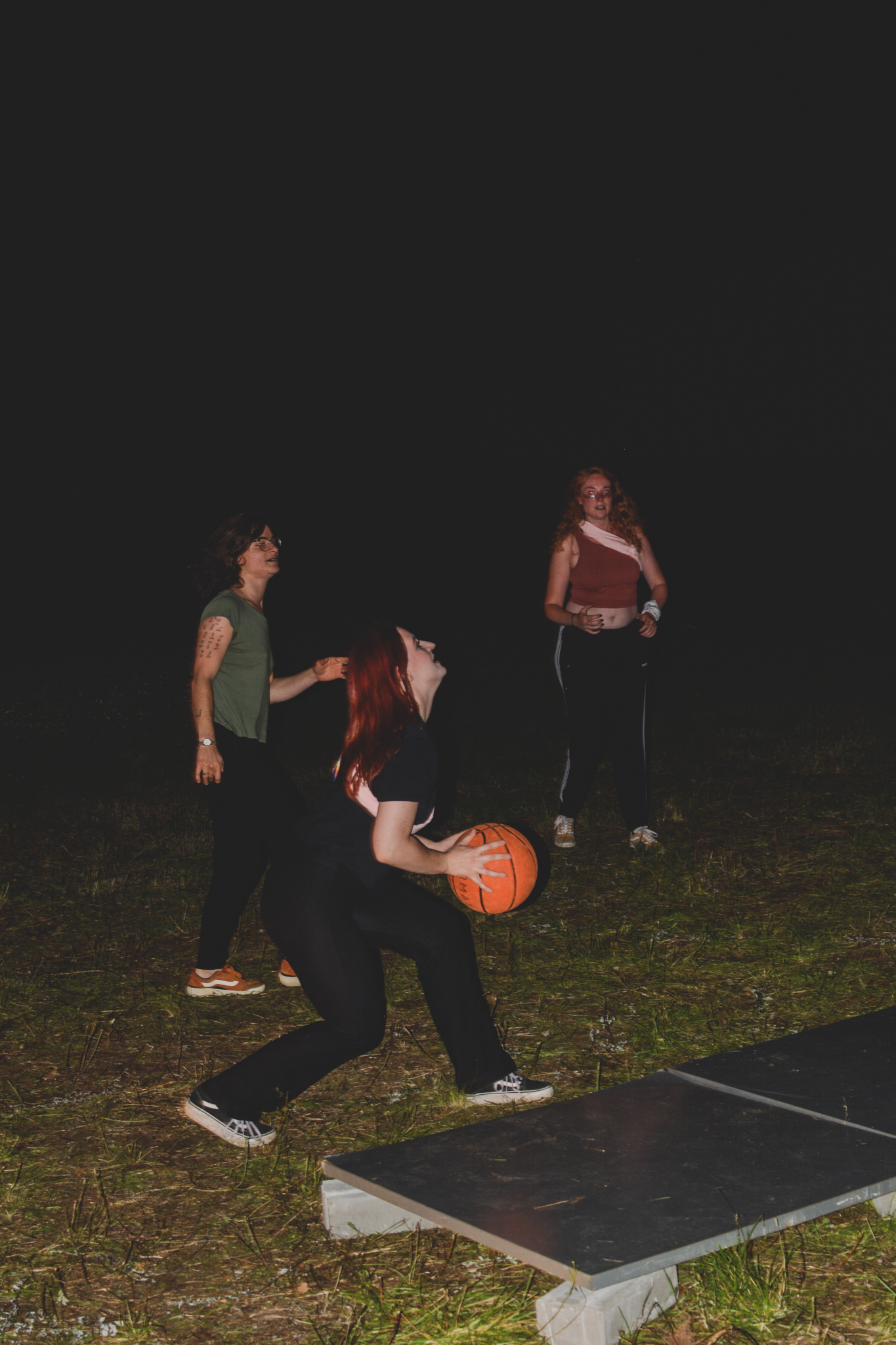 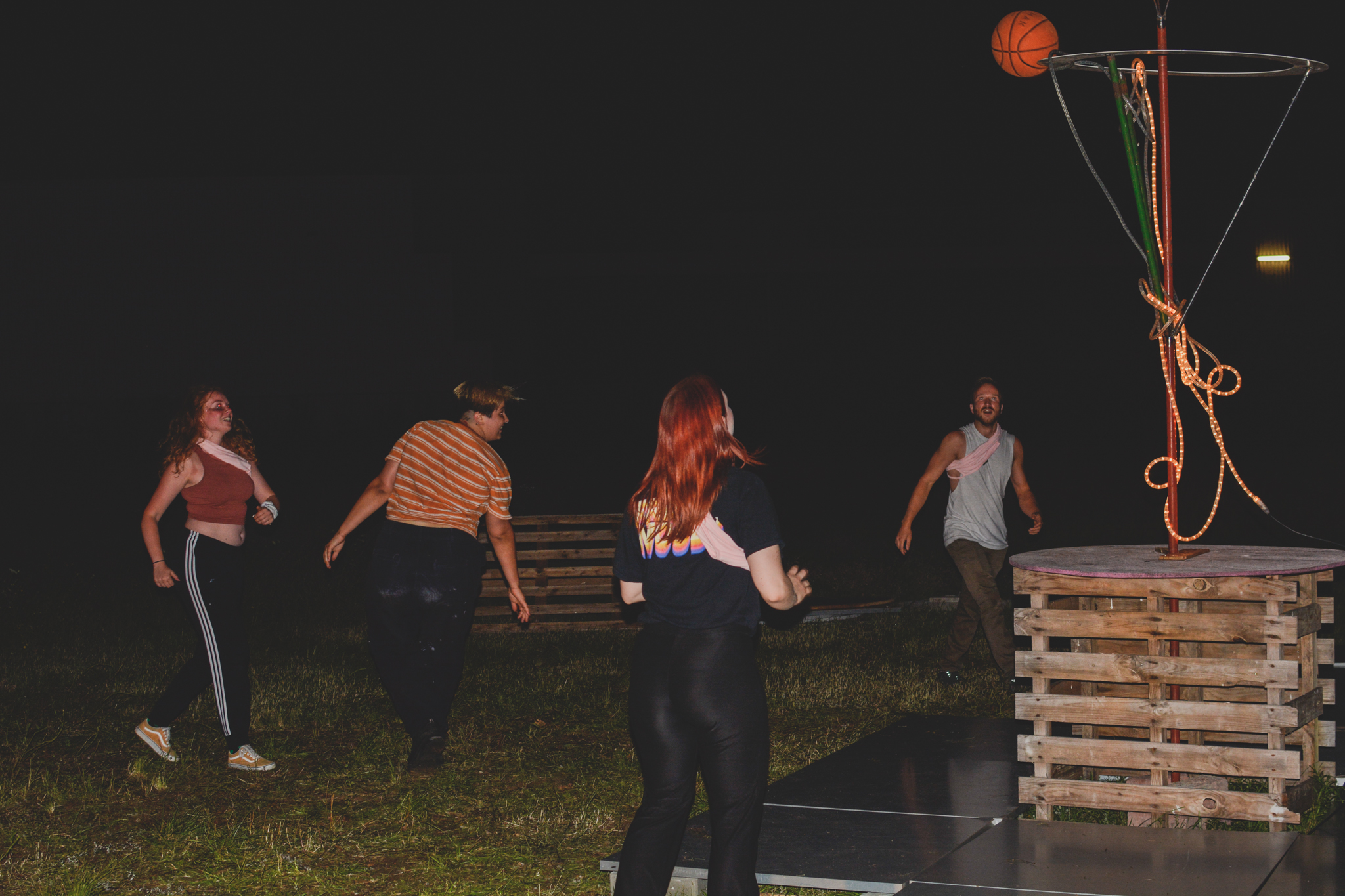 Day 3 – How can tennis transform into a mixed media performance? 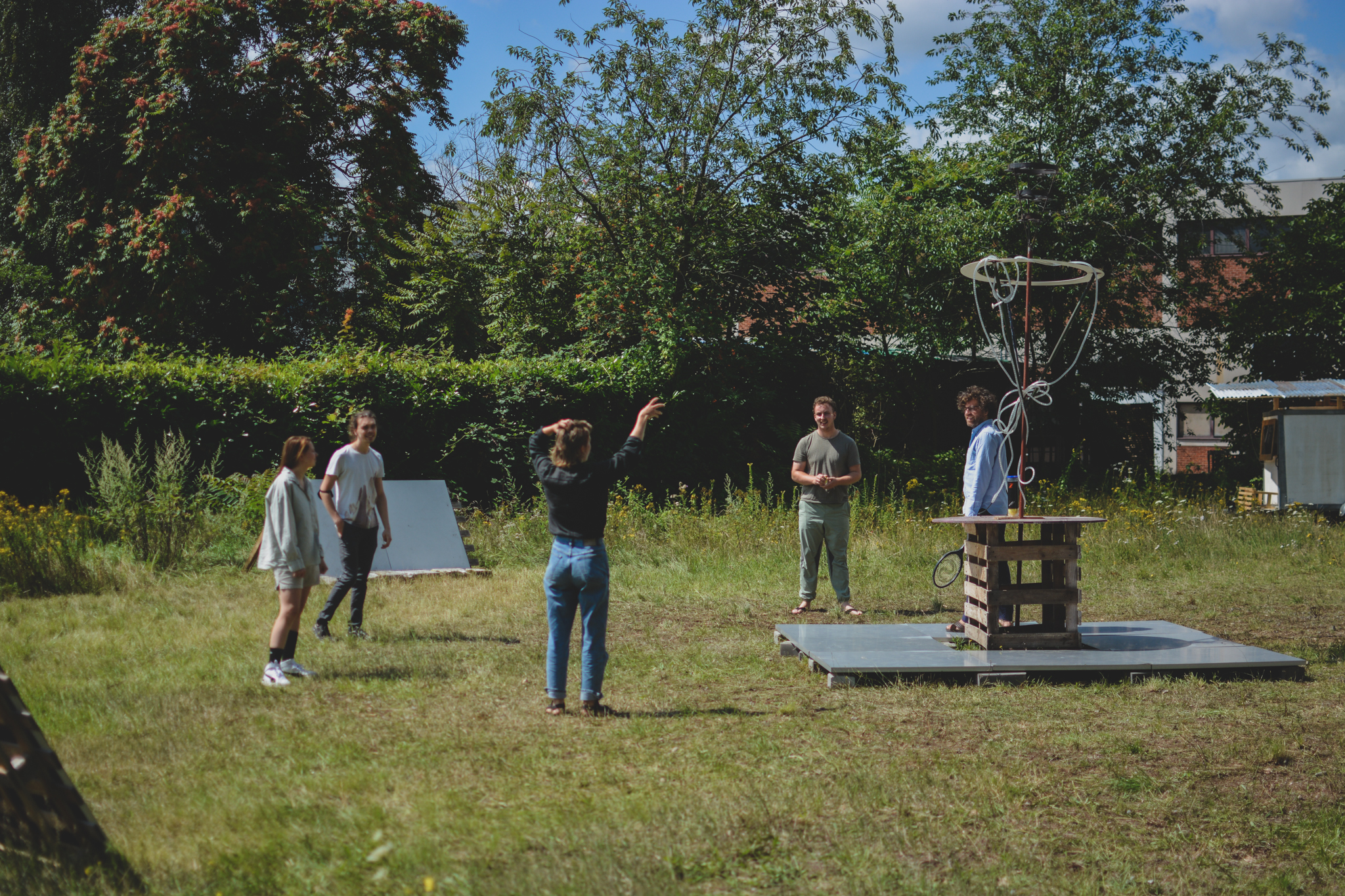 We started the day with rebuilding our playground for a new sport. We used part of our basketball court to transform our four football goals into tennis walls. One team tries to hit the ball against a wall and catch it back to score a point. The opposite team tries to intercept and throw this ball into the basketball hoop to switch sides. 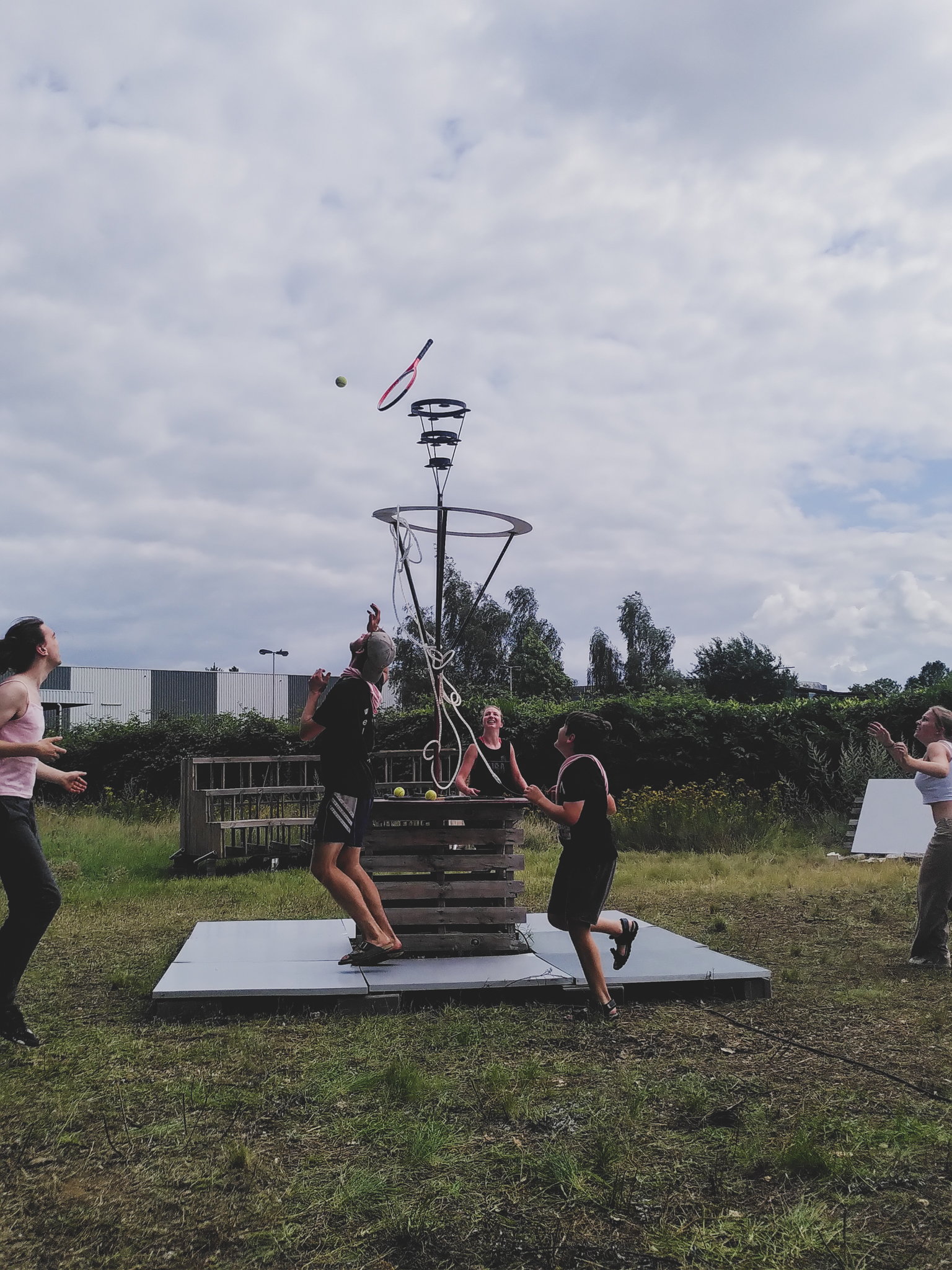 Afterwards we ate some strong soup made by Elke Cuppens and Stef Lemmens and we discussed our evening plans. We decided to link each of the four tennis walls with an audio or video system, turning this game into a mixed media performance in which we were immersed in video’s of intense tennis matches and a compilation of all the Maria Sharapova grunts ever recorded. 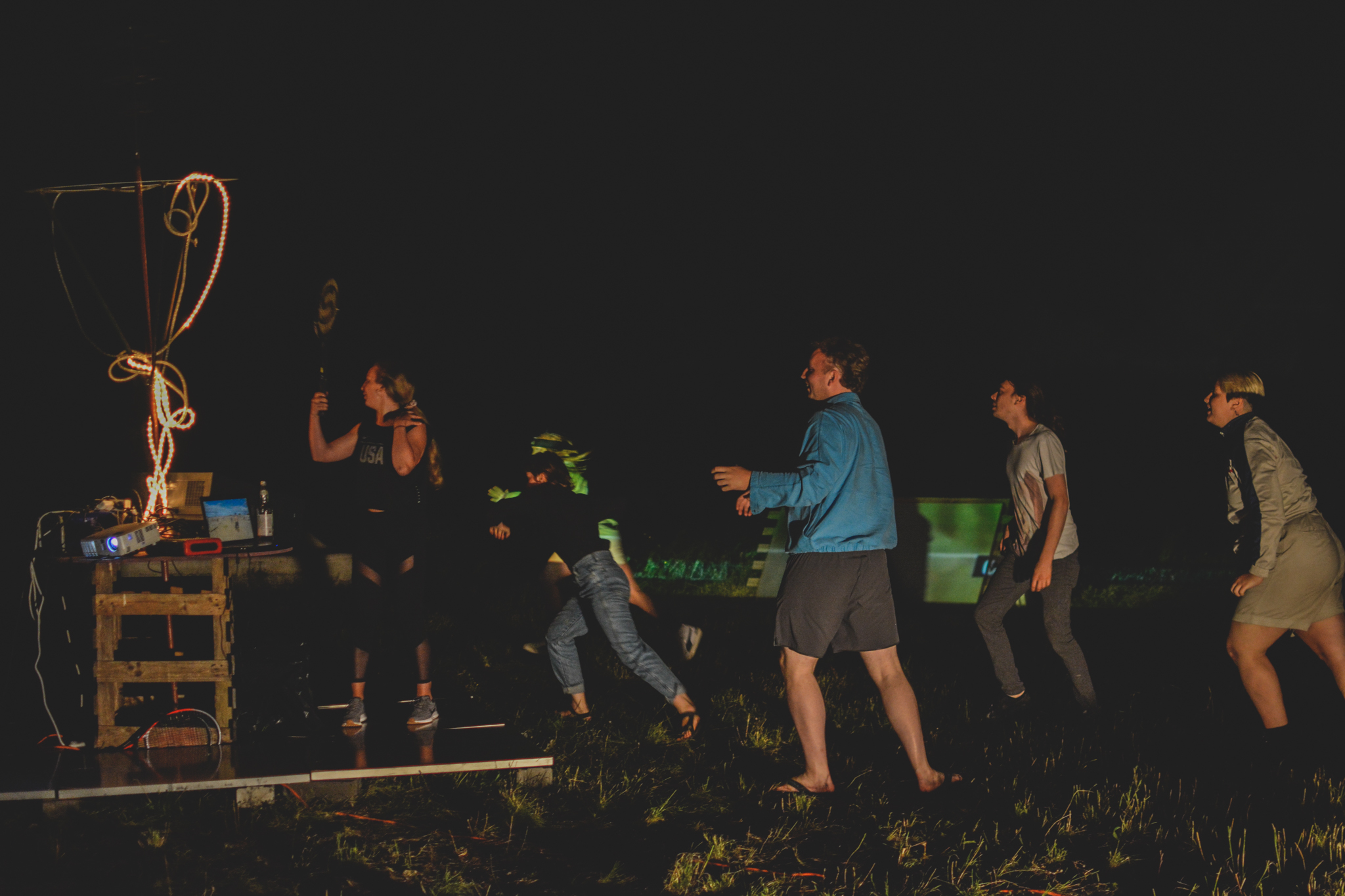 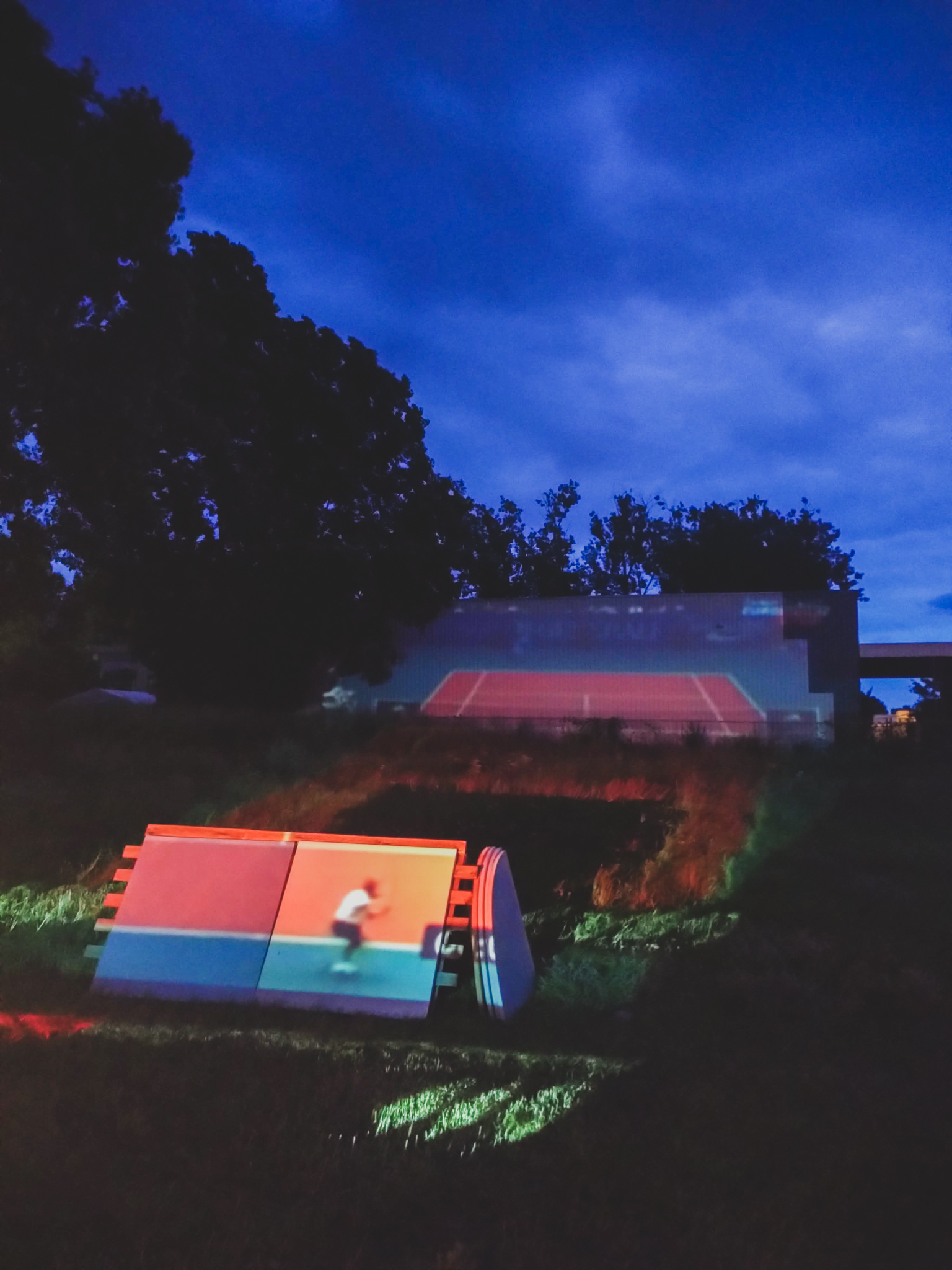 Day 4 – How can Dodgeball protect artists? 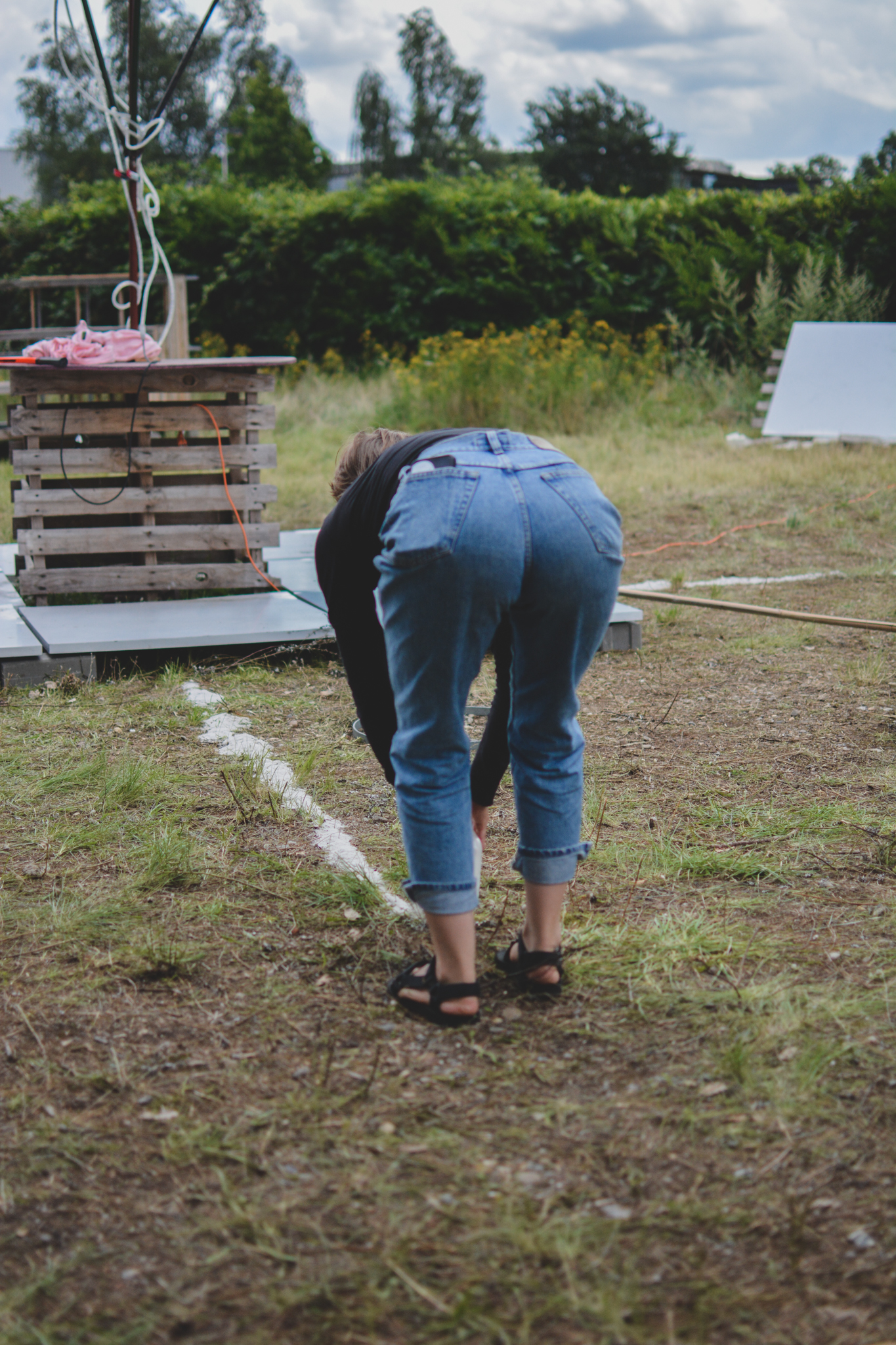 We decided to divide our field into four sections with some lines of white sand. Afterwards we came up with a dodgeball game in which two teams try to hit their opponents with the ball. If they succeed, the one who is hit has to stand on the remains of our basketball court which we refer to as ‘The Island’. They can escape if they throw a ball against one of the four tennis walls and catch it again. 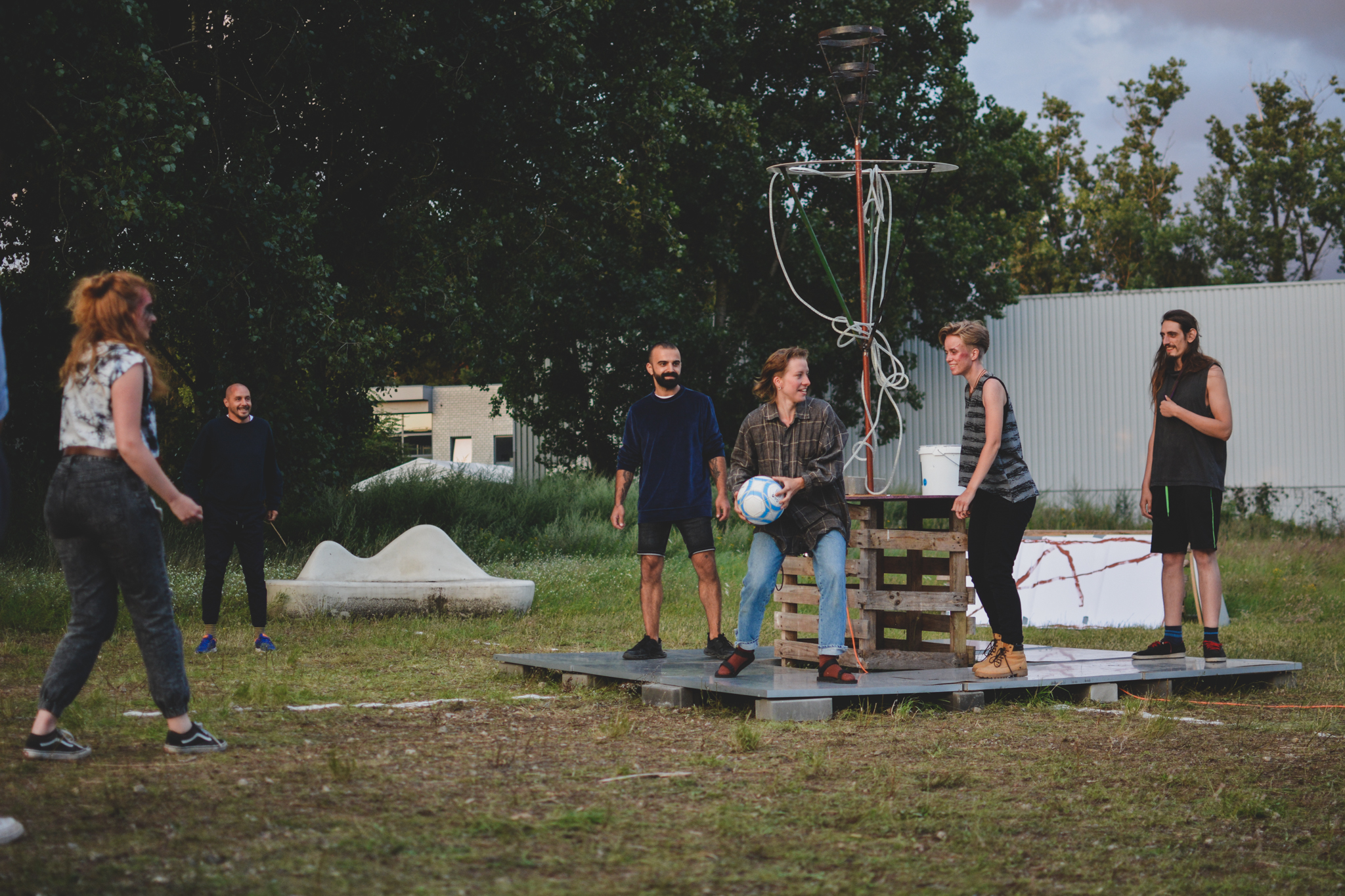 During our evening meal, prepared by Elke Cuppens, we came up with an idea to transform this game into an artistic experiment. Each team is assigned with one painter who tries to finish a painting on one of the four tennis walls without getting hit. The teammates try to protect their artist so he or she can finish their artwork. This new interpretation made me think about the vulnerability of artists in our society. Who is trying to hit them? How can we protect artists against the dodgeballs of life? 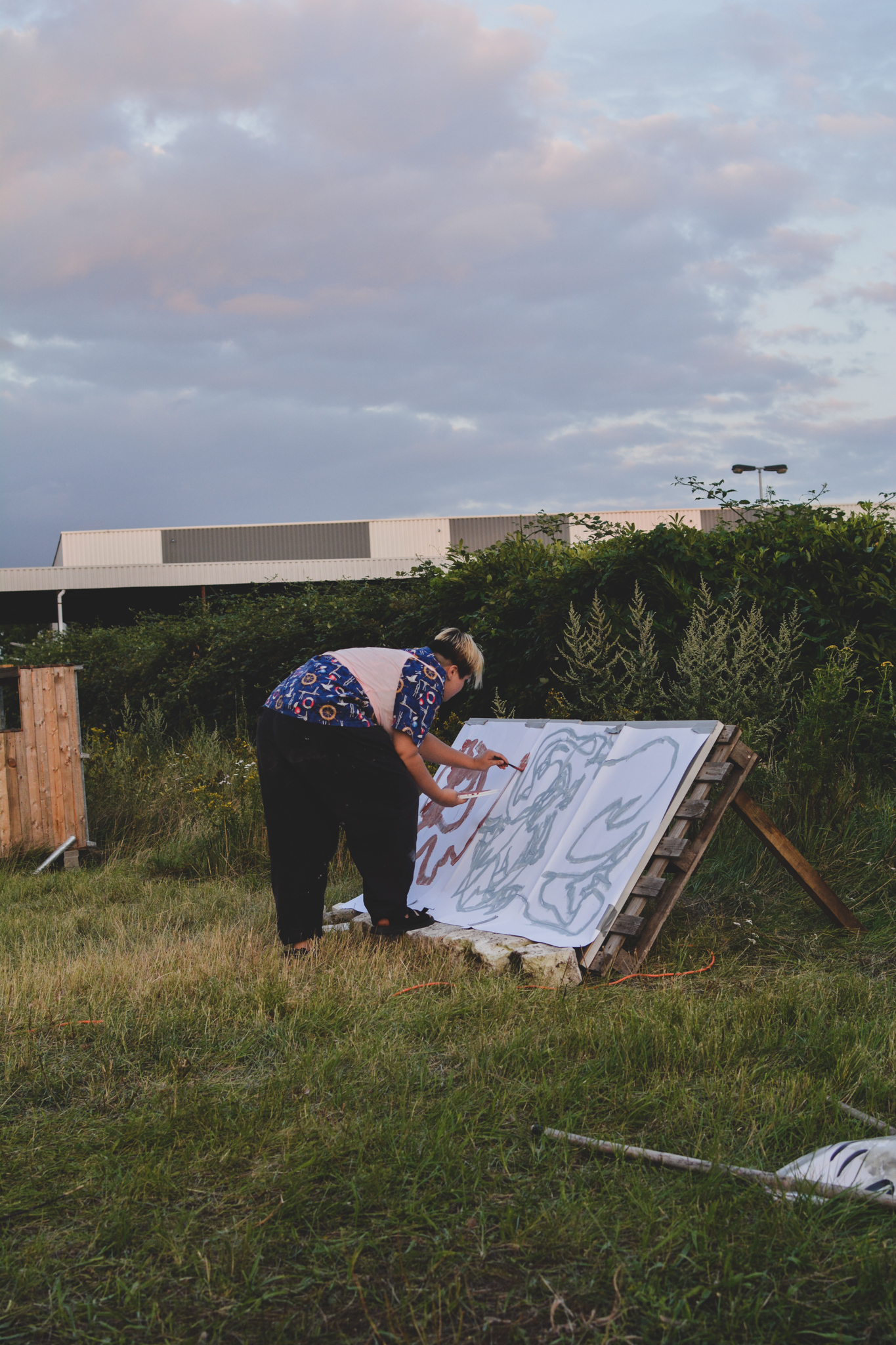 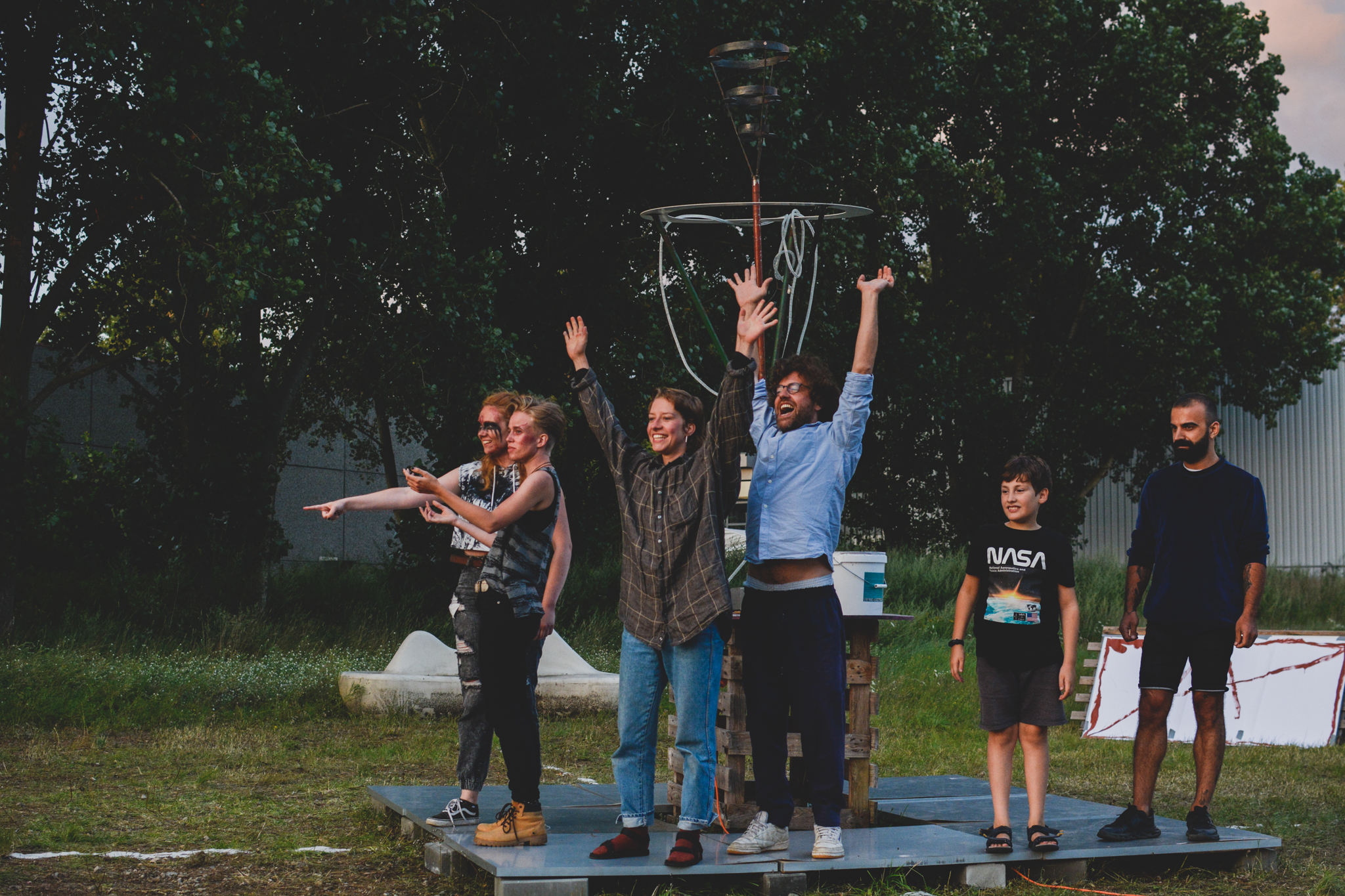 Day 5 – How can sports inspire us to design a festival? 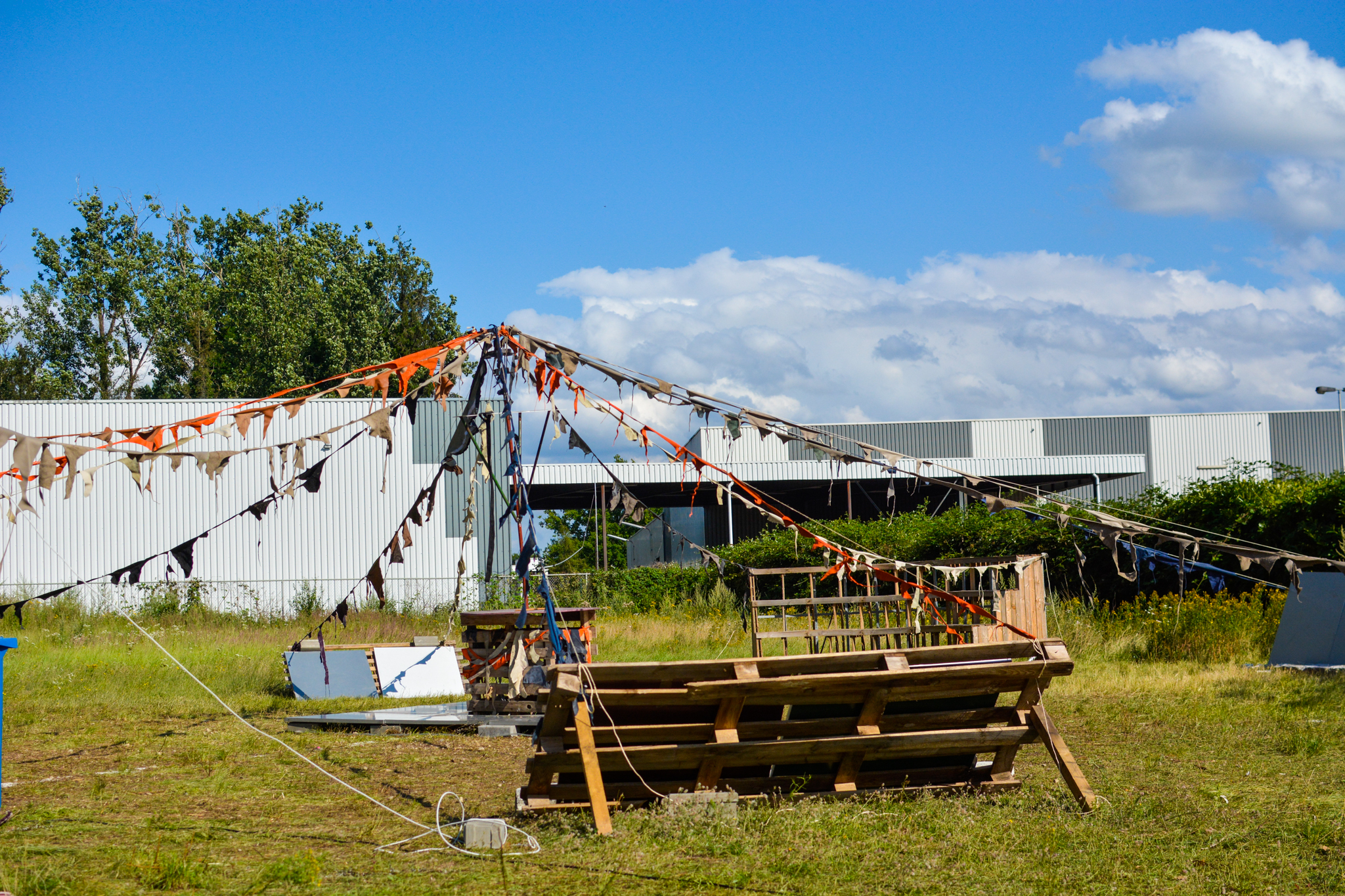 On the last day of Playground for the Wild n°07 we thought about ways to turn this sport field into a space of celebration. We decided to use all of the constructions that were added throughout the week as our starting point. This way our basketball hoop became the central pillar on which we build a tent like construction using leftover fabrics as colorful flags. The basketball field around this pillar was used as a stage strong enough to withstand the most acrobatic dance moves. Our four tennis walls were used as a seating area and on each of the four dodgeball areas we designed an icon for the sports that were re-invented throughout this week. 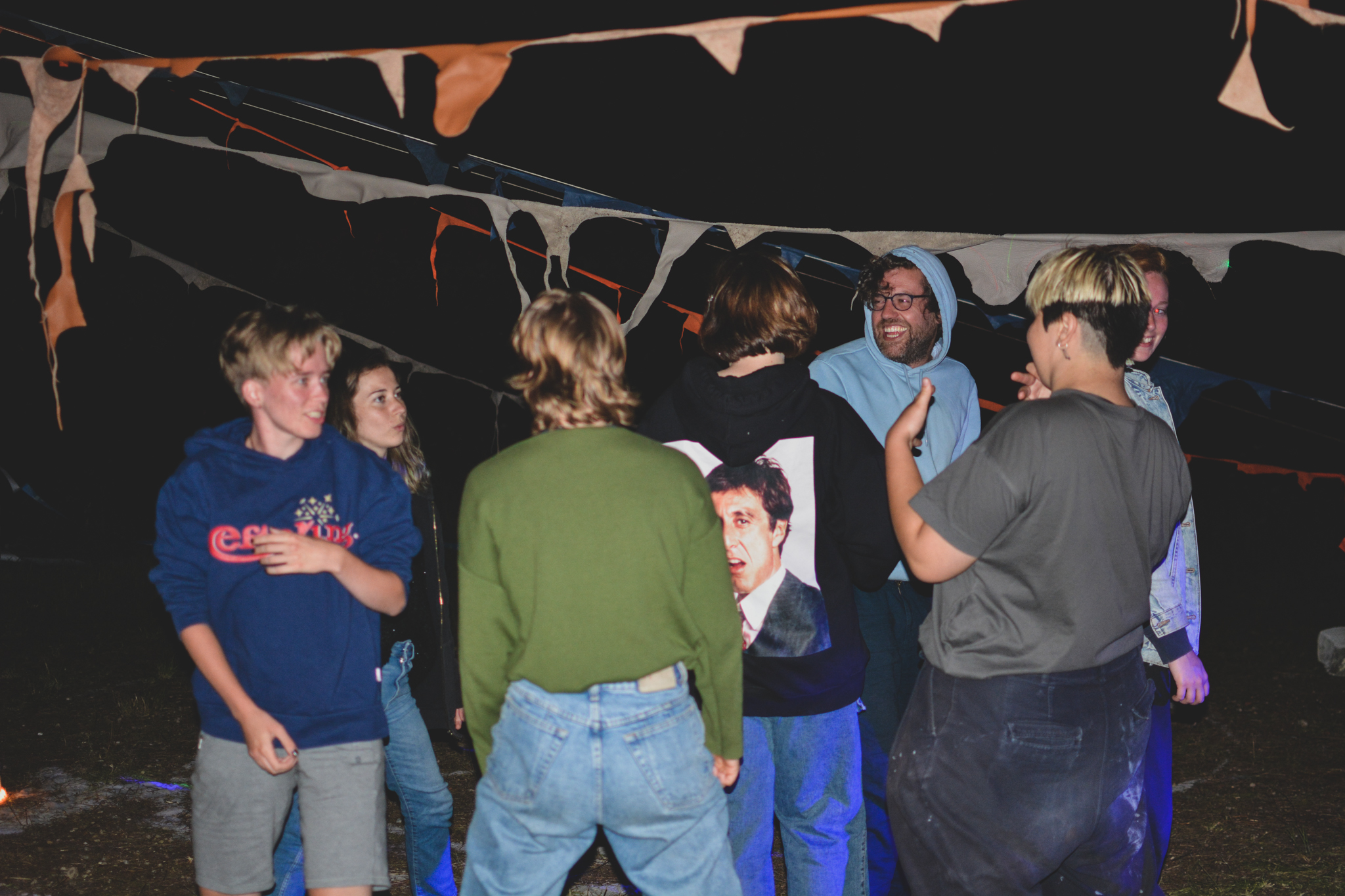